3 or 4 year old Rayann and her Jelly donut

When I was pastor at Church in the Acres Rayann was a young girl.  The two of us would steal some special father / daughter time by going to Dunkin’ Donuts on a weekday morning and then I would bring her to Mrs. St. Denis’ preschool classroom a little late.  Mrs. St. Denis was awesome!  She would smile and welcome Rayann in and let me go without a lecture about being late.  She did not even mind that I brought her a young girl all “juiced up” on sugar from a jelly doughnut and mountain dew.  There was a first grade teacher in the next classroom over who did not always appreciate the tardy marks and would sometimes speak into our lateness. 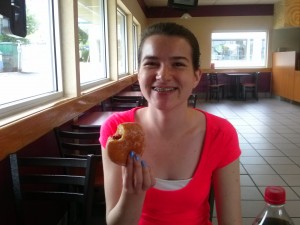 Over time I learned that I could lessen the wrath of Mrs. Nicewonger if  I brought her a cup of coffee when dropping Rayann off.  These were special times for Rayann and myself, we have always referred to them as our “Dunkin’ Donut Days”.

Last night Rayann asked me if I wanted to go with her to get a doughnut in the morning.  The morning turned into later in the afternoon…but we made it and got to have one of our special Dunkin’ Donut Days.  The young woman staring back across from me ordered the same jelly doughnut…would of had a mountain dew but the store did not have any…but other than those similarities everything else sure has changed!  I am amazingly proud of the young woman she has become.  I hope I have the privilege of sharing many more Dunkin’ Donut Days with her!