I am a member of the American Baptist Ministers Council.  I get mailings and emails from time to time and while some of it is good reading little really catches my attention and gives me pause to think or wrestle with deeper issues.  This morning I opened the June 2016 newsletter and Rev. Dr. Debora Jackson, Executive Director had penned a piece I wish I could call my own.  I have been wrestling to find the words to explain and express my frustration and concern over what I am watching and hearing in our political discourse and could not find the words…at least words Nancy would let me say in public.  Dr. Jackson has found the right words, words worth reading and sitting with for a while.  As I read her piece I understand it to be a call to prayer, a call to people of faith to speak, move, live in such radically different ways that we transform the political discourse within our communities.  “Thy Kingdom Come, Thy Will Be Done…on Earth as it is in Heaven!” 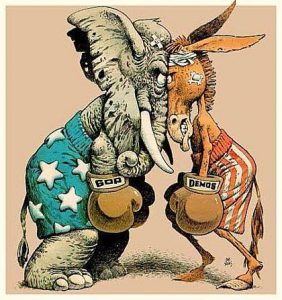 Disclaimer: This is not meant to be a partisan political piece. Oh sure, there are politics involved. And yes, I am a political junky who loves presidential politics. However, this is not the time or the place. There is a bigger issue here for me.

I was listening to a commentator talking about the presumptive Democratic and Republican candidates and as he spoke, I heard a sigh escape from his mouth. I understood. This is going to be the nastiest, ugliest presidential race that I can remember in my lifetime and I, for one, am not looking forward to it. What I am looking for is Jesus. I’m trying to find Christ in political life and I will tell you that I’m pretty hard pressed to do it.

I cannot find Christ in mean spirited, vitriolic debate. When I was in high school, I competed on the debate team, so I know what it means to spar with an opponent. I know how to attack an argument and offer countervailing points. That is what vigorous debate does: it contrasts the views and opinions of one against another so that individuals are swayed and moved to choose. However, in the sparring, the attack was not personal. It was not hurtful or harmful to the individual. We attacked the argument and not the person. But this is not spirit of what we are seeing on the national stage. I’m trying to find Christ in political life. And in that search, I am reminded of the covenant that members of my church recite on the first Sunday of the month:

“We further engage to watch over, pray for, to exhort and stir up each other unto every good word and work; to guard each other’s reputation, not needlessly exposing the infirmities of others…”

Now one could argue that we are covenanting to do this with fellow believers of the church. However, I would counter that we should see evidence of that covenant keeping in our daily walk, regardless of who the individual is. And if our political figures would do this – to debate the issues, not lob personal attacks and attempts to assassinate personal character, we might find Christ in political life.

I cannot find Christ in the prejudiced racial, ethnic, or gender based comments and insinuations that have characterized the political climate. Sly & the Family Stone offered words that summarize what we see in too many instances: “There is a yellow one that won’t accept the black one, that won’t accept the red one that won’t accept the white one…” It is a sad state of affairs that 2 just should not be. From the start, this country was a country of racially diverse peoples: indigenous peoples who were here before the “Forefathers” arrived; European immigrants seeking freedom; Africans who were first indentured, then enslaved; later Asians and peoples of Middle Eastern heritage. We came; and in the coming we are, as is inscribed on the Statue of Liberty, the huddled masses yearning to breathe free. And whether our ancestors came 200 years ago from Great Britain, or two years ago from Central or South America, we are trying to live out the promises of this country. So for that reason alone we should be seeking to create a united republic that affirms the motto “out of the many, one.”

But more than that, our Judeo-Christian heritage compels us to come together. We are told to welcome the stranger. We are reminded that in doing so we might be entertaining angels unawares. We are to care for the widowed and the orphan. We are to be the champion for the marginalized and oppressed. And given these mandates, I can’t find Christ in political arguments that suggest that I should be suspicious of you because of the color of your skin, where you are from, your gender, or orientation. No, this is not the way of the Savior. We will find Christ in political life when we love our neighbor as we love ourselves.

Finally, I cannot find Christ in the polarizing religious positioning that suggests that God loves you if you believe as I do and hold the values that I hold. I was watching the movie “Kingdom of Heaven” and found myself amused by some of the rhetoric of this historical narrative. Christian crusaders declared war against a militarily superior Muslim cavalry. Their rationale: “because God wills it.” And when the movie’s protagonist suggested that maybe Christians and Muslims were meant to share Jerusalem, the word “blasphemy” was cried out in response.

The setting of the movie was the 12th century, but it’s alarming how some things have not changed. We express fear and distrust from people who believe differently than we do. And we can be critical and condemning of people whose faith traditions are different than ours. Admittedly, this is one of the things about being Baptist, in general, and American Baptist, specifically, that I love. Within our “Four Fragile Freedoms” we espouse the freedom of, for, and from religion that says that we defend the right of people to believe as they do even if that belief is different from ours. We would all do well to remember that God is not a respecter of persons. And we would find Christ in political life when we realize that anyone who fears God and does what is right is acceptable to God.

So it is true that it’s going to be a really long five months until the election. And if these early days are any indication, it’s going to get far worse before it gets better. But if some of us will endeavor to find Christ in political life: to love our neighbor, to welcome the stranger, and to promote religious liberty, maybe what we do, what we say, and how we act might be infectious and others will emulate.