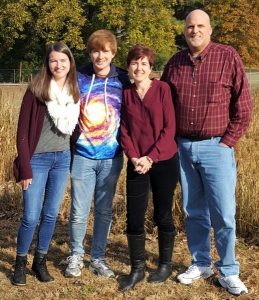 Nancy and I were waiting in the oncologist’s room.  Talking about anything but why we were there.  My last few reports had been good but there is always this sense of fear each time we head back to meet with the doctor.

We heard the familiar knock on the door and then he entered.  There were no words of greeting or welcome.  The first words out of his mouth as he entered the room, “Why are you here?”

All the reports look good.  Numbers are fantastic.  “I do not need to see you for three months.”  It is safe to relax and breathe again.  Make a few plans, schedule a few appointments and head out the door.

I have been blessed beyond all expectations!  I am nearing one year without any chemo treatments.  January 9, 2017 was my last chemo treatment.  When this journey began in May of 2016 my oncologist suggested the most positive expectation I should have regarding life expectancy was two years.  Nobody is promised tomorrow, or even this afternoon, but it does appear that I will be shattering their projections.

The fact that I have been blessed beyond all expectations humbles me…and troubles me.

During my journey there have been all kinds of battles to face.  They come in many forms, physical, emotional, relational and spiritual.  One of the most surprising came in midst of this latest season of blessing.  Early on I faced the reality of my mortality and made peace with the fact that my vision of a long and happy life was most likely not going to be reality.  I found peace within the scriptures and hope in the person of Jesus.  Empowered with peace and hope I focused on “finishing well”.

When it became clear that my treatments were working and the oncologist’s original predictions were most likely incorrect two things happened.  First, I was thrilled and excited.  I remember walking out of my doctor’s office in a daze.  It was similar to the cloud I walked around in following my diagnosis.  My world was changing and nothing seemed settled or stable.  I slowly allowed myself to move from planning for my funeral to planning to live life.

Second, I found myself wrestling with my new identity…someone who was living with cancer.  I had made peace with my mortality.  While not excited about the prospect of death I was at peace with that reality and found hope in the future that was to be mine through faith in Jesus.  That peace did not come easy.  There were struggles, fears, anger, hurt, and anguish until I finally laid them down and claimed the words of the psalmist,

“Yea, though I walk through the valley of the shadow of death, I will fear no evil: for thou art with me; thy rod and thy staff they comfort me.  Thou preparest a table before me in the presence of mine enemies: thou anointest my head with oil; my cup runneth over.  Surely goodness and mercy shall follow me all the days of my life: and I will dwell in the house of the Lord for ever.” (Psalm 23 – KJV)

Returning to the Land of the Living

I struggled to move from that place of peace and back into the “land of the living.”  It was hard to begin thinking about life, relationships, ministry with a “long-term” view again.  In a very real sense I felt as if I was mourning something while in the midst of the greatest news of healing and restoration I had ever experienced.  How can this be?  What could I be mourning?  For some reason God had seen fit to bless me with more time with Nancy, Rayann, Joseph and those I love…why the spirit of mourning?

It was then that I came across one of Henri Nouwen’s writings.  Nouwen has been one of those writers whom God has used in my life to call me deeper, past myself into a growing relationship with Abba Father.

In “Beyond the Mirror: Reflections on Life and Death” Nouwen tells the story of his brush with death.  Struck by a van while walking on the side of an icy road he was in the hospital, near death.  People rushed to his side, said their goodbyes, and helped him hear clearly from God in the midst of the tragedy and treatment.  Nouwen writes of his eventual recovery and the reaction of his friends…

“The way my friends reacted to my recovery caused me to reflect on the way life and death are perceived in our society.  Unanimously, they congratulated me on my restoration to health and expressed their gratitude that I was doing so well again.  Although I was deeply grateful for their attention and affection, the encounter with God in my hours near death made me wonder whether being “better again” was indeed the best thing for me.  Would it not have been preferable to have been completely set free from this ambiguous world and taken home to full communion with God?  Would it not have been better to have left this mortal world and to be held ultimately safe in the incorruptible reality of God?  Would it not have been better to have arrived than to remain on the road?

No one wrote, ‘To have been found not ready to be completely united with the Lord to whom you have given your life must have been a disappointment, but as your fellow traveler I welcome you back into the struggle of life.’”

Glad to be “welcomed back”

Nouwen’s writing captures the source of my mourning, of my struggle while I got well physically.  The healthier I became physically the further and further I moved from experiencing the ultimate “Life to the Full” which Jesus talks about.

Just so I am clear, I am glad to be “welcomed back into the struggle of life.”  My plan is to follow the example of the Apostle Paul…

“But whatever were gains to me I now consider loss for the sake of Christ.  What is more, I consider everything a loss because of the surpassing worth of knowing Christ Jesus my Lord, for whose sake I have lost all things. I consider them garbage, that I may gain Christ and be found in him, not having a righteousness of my own that comes from the law, but that which is through faith in Christ—the righteousness that comes from God on the basis of faith.  I want to know Christ—yes, to know the power of his resurrection and participation in his sufferings, becoming like him in his death, and so, somehow, attaining to the resurrection from the dead.

Not that I have already obtained all this, or have already arrived at my goal, but I press on to take hold of that for which Christ Jesus took hold of me.  Brothers and sisters, I do not consider myself yet to have taken hold of it. But one thing I do: Forgetting what is behind and straining toward what is ahead, I press on toward the goal to win the prize for which God has called me heavenward in Christ Jesus. (Philippians 3)

The further I get away from my day of diagnosis, chemotherapy treatments the more life is slowly returning to “normal” – whatever that is.  My prayer is that as the demands of life, the cares of this world press in and upon me that I will not lose the sense of peace and confidence that I possessed while confronted with my own mortality.

It sounds strange but I found peace there.  I found comfort and strength in knowing that I did not journey alone.

Maybe God’s invitation in all this is to begin treating this life as what it truly is, practice and preparation for life eternal spent with God who loves me beyond all explanation?