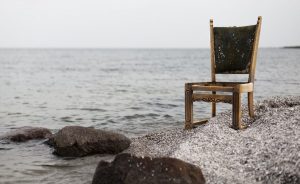 On the way home from meeting with my cancer surgeon, I asked Rayann what she thought of the appointment. Rayann replied, “Sometimes, it feels like God rips the chair from underneath you.”

I am not sure God actually rips a chair out from beneath us, but I certainly understand the emotion Rayann was expressing.

The past few weeks have been filled with moments that felt like someone was pulling a chair from underneath me.

Two weeks ago I had my normal three-month scans. When the scan report appeared on my healthcare portal, I was less than encouraged by the language. It spoke of one of my metastases, “doubling in size.”

Last week I completed bloodwork in advance of upcoming appointments. Those results were a mixed bag. Much of the report was very positive. Unfortunately, my CEA (which measures active growing cancer) had doubled and was above normal for the first time in two years.

Wednesday morning, I met with my radiologist. He confirmed my suspicions. My cancer was active once again. It turns out the microwave ablation I had back in June aggravated my cancer and caused it to grow faster. END_OF_DOCUMENT_TOKEN_TO_BE_REPLACED